The fireplace chimney has several parts. So many, it can be confusing. For it to work properly, all these parts need to be in excellent shape and in good working order.

They must also be serviced regularly. Above all, it helps if you understand the basic working mechanisms of these parts.

Read on to learn everything you need to know about the chimney flue, including why it works, the different flue styles, chimney flue liners, etc.

What is a Chimney Flue?

The chimney flue is a duct, pipe, or opening in the chimney designed to remove exhaust gases from the fireplace, furnace, water heater, generator, or boiler to the outdoors.

Originally, the term flue meant the chimney itself. In the US, the flue is also sometimes referred to as a vent when used in boilers and breaching when used in water heaters and modern furnaces.

The flue is made from different materials, though the majority are constructed from ceramic, clay, or metal conduit.

It is installed at the center of the chimney and contains the combustion products, ultimately directed them outside the house, thus protecting the chimney walls from heat and corrosion.

How Does a Chimney Flue Work?

The fire down below in the fireplace needs three things to burn continuously – oxygen, fuel, and ignition. Fuel may come from gas, wood, pellets, etc.

Ignition is often achieved through a pilot mechanism or manual match lighting, depending on the fireplace type. The oxygen is where the chimney flue comes in handy.

The fire requires reliable airflow to burn and vent. In flue-less fire systems, the required airflow is derived from the home.

However, taking up oxygen from the home to burn the fire and thereafter venting combustion gases back into the home creates serious health and safety issues, including carbon monoxide poisoning.

The flue system removes the risk by allowing the fireplace to continually draw fresh air from outside to facilitate the burning process and removing any exhaust gases out of the home.

Flues operate by buoyancy, also known as the stack effect. Some chimneys also use “induced” flues that use a fan to initiate air and gas flow into and out of the flue, respectively. Building codes and other standards typically regulate the materials, design, and installation of the flue system.

Why Do You need a Chimney Flue?

As we’ve seen, you need the chimney flue for two reasons – to draw in fresh air for fuel combustion and remove exhaust gases.

Flues are available in several shapes, styles, and materials, so you can pick one that best matches your needs. There are at least six basic types as follows;

What’s the Difference Between a Balanced Flue and an Open Flue?

Thus, air for combustion in the balanced flue system is drawn from outside, traditionally via the outer pipe. The inner pipe removes combustion gases.

It’s important to understand the difference between the flue liner, chimney flue, and chimney vent. The chimney flue serves as a passageway for smoke, gas, and other products associated with combustion. It plays an essential role in protecting other parts of the chimney.

The flue lining is mostly found in modern flue systems. As the name suggests, it’s a lining material that protects the flue and, by extension, the chimney. The lining needs replacement periodically as it’s bound to wear off. Remember, the flue itself is just an opening; it doesn’t wear out.

Finally, vents are usually pipes. They also help evacuate exhaust gases and bring in combustion air. Indeed, the vent may also pass through the chimney.

However, it’s a pipe. Moreover, vents are 100% designed for gas fireplaces as they can’t handle the intense heat from traditional wood-burning stoves.

To answer this question, you need to understand how combustion fire and gases affect the flue lining. Open fires produce a very high flue gas temperature, compared, for example, to wood stoves, which are more efficient and have lower flue gas temperatures.

However, the low temperature has a serious downside – increased condensation. Wood stoves produce a lot more condensation of flue gases against the side of the liner.

Sulfuric acid, for instance, condenses at about 150°C. This condensation is a huge problem as the acid can attack the flue lining. The corrosion is further accelerated by water, which is one of the by-products of combustion.

Although the 316-grade liner is good enough for open fires, it’s barely capable of handling the aggressive corrosion resulting from wood fires. The 904-grade liner stands up better to such conditions.

However, remember that the 904-grade flue liner is also more expensive (often twice as expensive) than 316-grade liners.

How Long Will a Flexible Flue Liner Last?

The average lifespan of a flue liner is 15-20 years. This means that you’ll need to replace the liner after every two decades at most to make sure that it’s up to code and not a serious fire risk.

However, it’s important to understand that certain factors can shorten or improve the life of your flue liner. Stainless steel liners, for instance, tend to last up to 20 years with goof maintenance, with cast-in-place liners lasting even longer – up to 50 years – with good maintenance. Clay tile liners are the least durable, typically lasting 5-15 years.

The other factor is the frequency and quality of maintenance. The fireplace system, including the flue liner, should be cleaned at least twice a year. Otherwise, the liner deteriorates much faster. If you want to clean your chimney, you can choose one from this chimney cleaning kit review.

How Long Does a Chimney Liner Last?

The chimney liners and flue liners are essentially the same things. It’s the lining found inside the opening in the middle of the chimney, which basically refers to the flue.

The only slight difference is that “chimney liner” is the traditional term and “flue liner” the more modern term. The chimney liner, therefore, mostly refers to the fireclay tile lining the flue opening.

This special tile is carefully laid inside the chimney to eliminate any ridges and spots that may cause the accumulation of dirt and combustion gases.

A significant downside of the traditional chimney liner is the difficulty in repairs if tiles get damaged deep inside the chimney. As mentioned above, the liners typically last 5-15 years.

How Much Does a Flue Liner Cost?

However, the actual amount you’ll pay depends on the type of liner, liner dimensions (diameter and height), the chosen material, and whether you need insulation. Another critical factor is the number of units connected to the flue system.

Regarding material specifically, cast-in-place liners are the most expensive, costing, on average, $250/foot. In second place are thermocrete liners that cost $200/foot. Stainless steel liners are next, costing $65/foot on average, while the cheapest material, clay, costs about $10/foot.

How Much Does It Cost to Reline a Chimney? 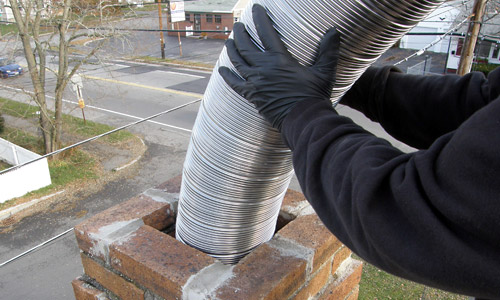 It costs between $2,500 and $7,000 to realign a chimney. Ultimately, the cost is determined by the type of line you’d want to be installed and the chimney’s dimensions. It’s always best to let a professional replace your chimney liner.

First off, if you’re going to attempt a DIY, you should only consider stainless steel chimney liners. The other materials are too complex for DIY installations.

Next, you need to assemble the necessary tools. You need a razor knife, flat head screwdriver, caulk gun, safety glasses, and a pair of working gloves. You may also need a grinder, hacksaw, and power drill.

What’s the Difference Between a Flue and a Chimney?

What’s the Difference Between a Damper and a Flue?

The flue is the open middle of the chimney structure that directs combustion gases from the fireplace or stove out of the house.

A damper is a lever system found inside the flue that opens or closes to let out combustion gases or block downdraft as appropriate. Typically, the damper remains open during the heating season and closed during the summer season.

How Much Does it Cost to Fix a Fireplace Flue?

The cost of fixing a fireplace flue ranges from about $150 to $800. The majority of homeowners pay between $163 and $820 for general flue repairs, regardless of the type of flue. However, expect to pay anywhere between $90 and $2,000 for high-end chimneys.

How to Open a Chimney Flue

You can open the chimney flue by pushing or lifting a rod all the way to open the damper. If the unit uses rotary control, turn it all the way clockwise. Finally, for some models, especially top-mount dampers, you need to pull a chain.

Is it Okay to Leave the Flue Open?

No. The flue should only be open during the heating season when you need to expel combustion gases. Otherwise, keep it closed to keep at bay twigs, branches, stray animals, and downdraft from outside the house.

When Should You Close the Flue?

During the summer, when you’re not using the fireplace. Leaving the flue open during this period leaves a passageway for downdraft, litter, and raccoons, among other unwanted elements.

How Do You Close the Chimney Flue?

You close the chimney flue by pulling a rod to open the damper, turning the control knob anti-clockwise, or, in the case of top-mount dampers, releasing the secured chain.

Is it Normal for Water to Drip in the Chimney?

No. If you notice water dripping down the chimney when, in your knowledge, everything inside the chimney is in top shape, then there’s a problem. You need to schedule an inspection or waterproof your chimney.

The chimney flue is an integral part of the chimney and fireplace system in general. It provides fresh air for efficient burning and helps remove combustion gases from home.

If you don’t have one, you should strongly consider getting it installed. Above all, always go with high-quality flue systems and ensure regular maintenance to extend the flue’s life.