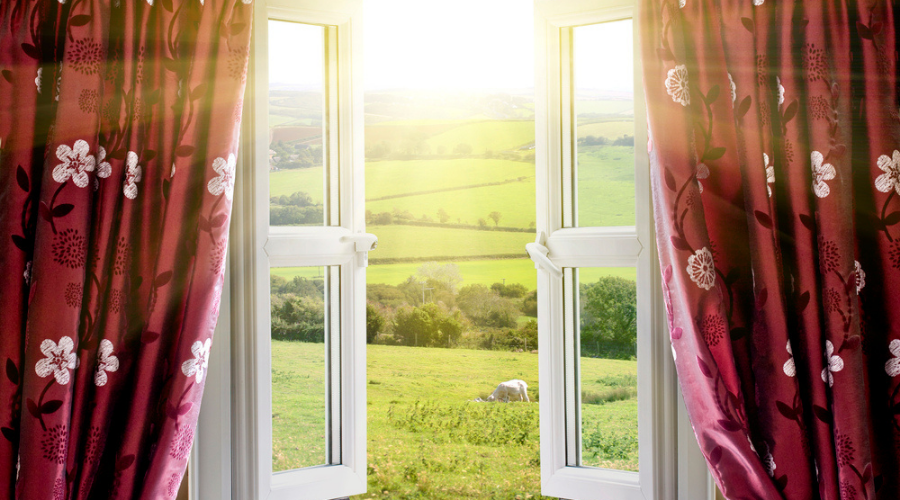 Whole house fans come in handy, especially during summer, when dealing with intense heat waves. The fan provides you with the much-needed cooling relief at record time while ensuring minimal power consumption.

This article has researched how the whole house fan functions and what you need to do when the fan is running.

How Many Windows Need to Be Open for the Whole House Fan?

For your standard house, opening one window while running the fan is sufficient to cool your home. For bigger houses, keep two or three windows open, depending on the size of the house, to allow proper air circulation.

Opening many windows will allow too much air into the house, thus decreasing the fan’s efficiency in generating force while pulling the air.

When you switch on the fan, hot air in the house is pulled to the attic and pushed outside through the gables and vents.

A vacuum is then formed, causing pressure which pulls the cool air from the open windows, effectively reducing the temperature in the house.

Therefore, opening the windows is an essential factor in the fan’s functionality, as they provide the outside air inlet.

For a whole house fan to work, the outdoor temperature should be lower than the indoor temperature. The fan is also not effective when the humidity level outside the house is high, as it will draw humid air.

Can You Run the Whole House Fan with Windows Closed?

Picture this; your fan works like an extinguisher. It pulls in the hot air, thus creating a vacuum that draws air from outside.

If you switch on the fan while the windows and closed, the created vacuum could cause pressure in the room, thus jamming your doors.

The pressure can also cause back drafting, a condition whereby the fan draws air from vented appliances such as your gas-fired water heater. The air force can even pull air from the chimney, thrusting soot all over your house.

Closing the windows will trap in the created vacuum, and as the pressure builds, the result can be catastrophic.

Should I Open All Windows While Using a Whole House Fan?

As we have already discussed, keeping windows open when the whole house fan is on is essential. However, it would be best to match the fan’s net-free venting requirement with the open windows.

Opening the window in the opposite direction from the fan increases the fan’s efficiency of pulling air into the room. If your home is standard-sized, opening one window will be sufficient to generate the right amount of air, whereas two or three windows will work for your larger-sized house.

If you want to cool a particular room, open the window in that room while keeping the rest of the windows closed.

Should I Run the Whole House Fan with Air Conditioning?

Whereas the whole house fan and the air conditioning complement each other, using them simultaneously is not recommendable.

First, the whole house fan and the air conditioning functions cool the house. Running both of them simultaneously will decrease your power efficiency while achieving the same results.

Second, the whole house fan does not release or use any chemicals. However, the air conditioning cools the air with the help of a chemical known as Freon. Thus, it could be counter efficient if the chemical released by the air conditioner is pulled into the attic by the fan.

Where Is the Best Place to Place a Whole House Fan?

Typically, the central hallway is ideal for installing your whole house fan. The perfect installation position of the fan is in the attic between the living area and the ceiling.

Your contractor cuts the ceiling using a premade template to install the fan and suspends it on the rafters.

Most whole-house fans come with a step-by-step installation guide. If you are a hands-on person, you do not need to engage a contractor to do the job. However, it would be best to be cautious while installing the fan, especially since the attic is usually dark.

Make sure that the attic is well lit before starting the installation. You will also need to ensure a safe working environment by placing wide planks across the joints.

How Long Should You Let a Whole House Fan Run?

However, most whole-house fans achieve the cooling effect after running for five minutes on average.

The goal of running the whole house fan is to cool the air and the entire house. So, if the conditions allow, you can put a timer and run the fan at sequenced intervals, say, two hours during the night.

What’s more, you do not have to worry about electricity consumption.

A whole house fan consumes 10% of the electricity consumed by the air conditioner while achieving the desired cooling effect.

What Is the Best Time to Run a Whole House Fan?

Run the whole house fan early in the morning before the air outside hits up for optimal results. The fan will dispel the hot air built up over the night.

After switching off the fan, close the windows and the blind to maintain the temperature. Using the fan during the day is inefficient since the air outside is heated up and will not produce any cooling effect.

You can also run the fan as long as possible to achieve the desired effect temperature without freezing out in the evening.

How to Use a Whole House Fan Effectively

We have seen that using a whole house fan can effectively cool the air in your house while keeping one or two windows open. The fan is also very efficient in electricity consumption, and you get to achieve an almost immediate cooling effect.

If you are thinking of installing a whole house fan, the first thing that you need to do is get the right fan for your house. To achieve this, calculate the area of your home in square footage and multiply it with the height to get the cubic meters.

Most fans manufacturers integrate a CFM ( Cubic Feet per meeting) rating. The higher the CFM rating of a fan, the higher the capabilities.

If you want to understand the capability of your whole house fan, divide your home cubic feet with the fan’s CFM. The result will give you the number of minutes it will take for your home to cool once the fan is on.

Ensure that the attic has a discharge vent 1.5 times larger than the opening you made to install the fan. The vents will ensure that the hot air is not trapped in the attic, reversing the cooling event. You can also put additional vents if need be.

It will also help check for blockages in the vents now and then and confirm that the airways are clear.

What windows do you want to keep open when the whole house fan runs and why? Ensure the windows are located in the shaded parts of the house instead of those directly facing the sun.

It is also vital to fit these specific windows with screens. As earlier discussed, the whole house fan will be more efficient if you only open the windows at an angle.

Close the Damper on the Fireplace

If you leave the damper open, the fan will pull air from the chimney and bring in the smoke odor and soot. Then, the soot can quickly spread all over the house because of the air circulation.

We have already seen that the cooling mechanism of the fan works by pulling cool air from outside the house. Therefore, timing is everything when it comes to when you run the fan.

Switching on your fan in the early mornings and the evenings not only gives you the optimal efficiency of the fan but power savings since you do not have to run the fan for long.

If there is nobody in the house, you do not have to keep the fan running. Therefore, avoid using the automatic timer during the day. Your home will cool in a matter of minutes when you run the fan in the evening after the day’s work. So, why not save on the power

Again, the air outside heats up during the day, and having the fan on then is ineffective since it will only circulate hot air inside the house.

During the winter, you won’t need your whole house fan for some time. Cover the fan and properly seal the air outlets to avoid high power bills.

When the summer breaks and the information you have gathered about the whole house fan, the heat should not be intimidating.

All you need is to open one window for your standard home and two or three windows. If your house is big, run the whole house fan, and you are good to go.

Keep in mind that having the windows open is essential for the fan to function.

How Many Windows Need to Be Open for the Whole House Fan?